Oh you made another brown ale? Let me guess: Goldings, Liberty, Willamette, a little chocolate malt, some dark crystal, blah blah blah. Get down with something new. Toasty oats, cinnamon, raisiny malt, what of it? Remember when you brewed like a homebrewer? Thumb firmly planted on nose when it came to the concept of style" - that's how a homebrewer brews.

All BIAB kits yield 3 gallons and include blended grain malts, hops, and complete instructions. All-grain kits use malted grain as the base for the finished beer; in addition to familiarity with basic brewing techniques and the equipment for fermenting, siphoning, and bottling, you will also need equipment for brew-in-a-bag all-grain brewing.

Very good grain bill. Good process. I mashed at a lower temperature than the given 155F mash. I also did a mash out and protein break in the beginning.

I only messed up when I put my unfermented wort in m fermentor, didnt realize I left my valve open and I lost about a gallon before I realized what happened, so instead of having 3 Gal I am only getting 2 Gal.

P
P.M.
If I could give 6 stars it still wouldnt be enough

Ive brewed countless kits from northern brewer, this beer is top notch. Northern brewer if you're reading please make this available as a 5 gallon biab. This is one of the best beers i have brewed. Maybe the best. I added 4 oz of my choice of whole bean coffee at flameout and its right up there with any coffee brown ale ive ever had. Dont worry, just order it! 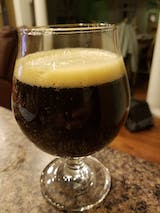 So this was my first attempt at BIAB and it went great. My brother in laws and I turned it into a guy day with the whole process. This kit was easy to follow with the included directions. This beer kit tastes great! Oatmeal Cookie brown ale will be a do over for sure. Brother in laws and I went to a local brewery and tried all their beers and we all agree that we made a great beer with this kit. This is my favorite brown ale.

A
A.M.
This was my very first all-grain brew of any type

I started off with a 22 quart pot, and since this was my first time doing an all grain brew - I didn't entirely know what I was going to be in for. I filled the pot pretty much all the way to the rim once I had my bag of grains in. But that was okay because I still had an inch or two from the rim.

I ended up doing a sparge to get myself up to the right level of wort. And that was somewhat messy because once again, this was my first time and I wasn't entirely prepared for what goes where and how messy will it be. I did my boil, I added my Hops at their scheduled times, I didn't even come close to a boil over. I suppose it might be the type of beer? So then I sanitized everything else, ran a garden hose inside the house through the kitchen window, and used my wort chiller too cool everything off.

Fast forward 3 and a half weeks, and I ended up bottling today. I actually used a primary for 10 days and then a secondary for 12 days. There was a pretty good amount of trub in the bottom of my primary, so I'm glad I did a secondary. Anyway, as probably most of us do, I drank a premature bottle to taste everything - and let me tell you this is the best thing ever. I was a little bit impressed by my first few extract kits, but this is the Lamborghini of brewing. I'm not sure that I will ever use extract again unless it's some kind of Clone or something that is hard to reproduce. I now own a 40 quart kettle and a propane burner. Now it won't take me 45 minutes to boil water on my stove. Plus it does kind of smell the house up, but I think it smells good.

PS - I'm going to keg the next one so that I can carbonate it faster, and not worry about a million glass bottles and caps. Also as a side note, for some reason I thought this would come with the actual bag, but it does not. No big deal they are cheap.

Brewed today and if the finished product tastes as good as the wort did going to the fermenter... It's gonna be phenomenal!! Mashed and Boiled per the directions. Put 1/2 a stick of included cinnamon in with 3 minutes remaining in the boil and included a whole stick at flame out (per the directions). The original gravity came out at 1.086, which is higher than the stated 1.066. I had to add a quart of water because the final amount of wort was a little less that 3 gallons. The addition of the water brought the original gravity to 1.076. Will update when the final product in flowing from the tap handle.